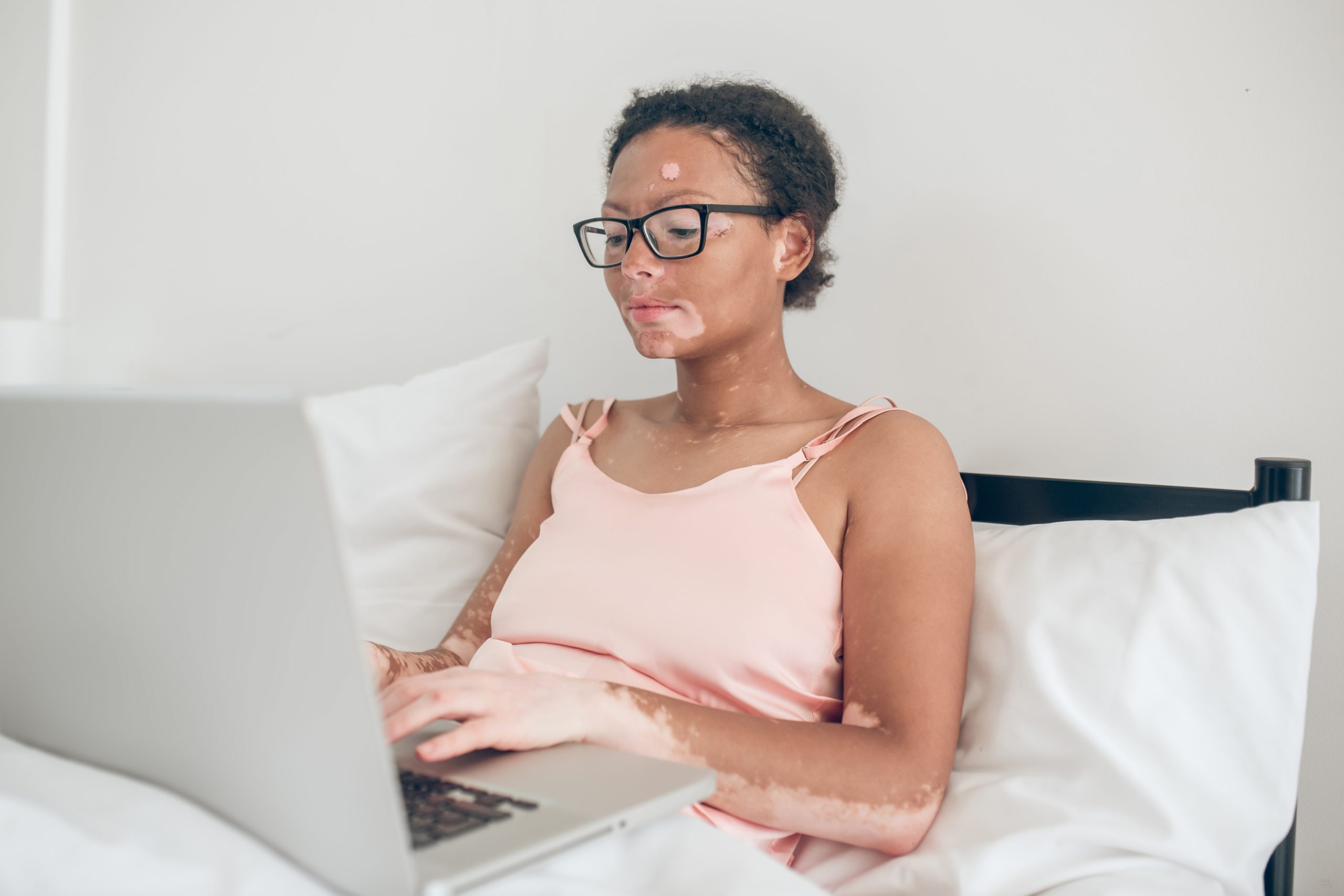 A 60 year‐old woman presented to the Dermatology department with amelanotic macules and patches in her face and arms that have appeared in the last 3 weeks. Three days before the onset of the symptoms, she had received the first dose of Astrazeneca vaccine against COVID‐19 (ChAdOx1/AZD1222).

On physical examination, circumscribed depigmented patches were observed, affecting both cheeks (Figure 1), forehead and between the eyebrows, as well as both arms. The lesions became more clearly visible when examined under Wood’s lamp (Figure 2). Well‐circumscribed depigmented patches in both cheeks, forehead and between eyebrows Depigmented patches were more noticeable when examined under Wood’s lamp

Blood test including thyrotropin was normal. Antithyroid peroxidase and antithyroglobulin antibodies were negative. With the diagnosis of vitiligo, she initiated a treatment with tacrolimus ointment 0.1% twice a day.

Vitiligo is an autoimmune disease in which there is a progressive depigmentation due to the loss of melanocytes in epidermis. In cell stress conditions, oxygen free radicals cause cell damage. In this inflammatory microenvironment, specific neoantigens are generated by melanocytes, like HSP70i, HMGB1 and S100B, leading to activation of innate and adaptive immune response. Eventually, dendritic cells present antigens to T lymphocytes, leading to destruction of melanocytes. Various studies have proven the central role that HSP70i plays in the pathogenesis of vitiligo, since its overexpression is associated with greater activation of dendritic cells, and therefore an increased lymphocytic infiltration in depigmented areas. 7 , 8

A relation between COVID‐19 and autoimmune phenomena has been reported. The most accepted theory considers that molecular mimicry between antigenic epitopes of the virus and certain human proteins, such as heat shock proteins (HSP60 y 90), 9 , 10 could be the origin. In fact, these proteins have been associated with several autoimmune diseases triggered by COVID‐19 infection, like Guillain‐Barré syndrome, autoimmune bullous diseases 10 and some forms of vasculitis. Additionally, cross‐reactivity between SARS‐CoV‐2 and other tissular human proteins has been demonstrated, especially transglutaminase 2 and 3, ENA, myelin basic protein and even S100B. 11 These findings suggest that a similar mechanism could be the cause of autoimmune diseases triggered by covid‐19 vaccination. However, IgG antibodies generated against SARS‐CoV‐2 have not been shown to be able to recognize and react against heat shock proteins. 12

Another possible mechanism suggested by Abdullah et al. 13 posits that COVID‐19 infection would stimulate dendritic cells to produce massive amounts of IFN‐I, which also plays an important role in the pathogenesis of vitiligo. In the case of psoriatic flare‐up reactions, it has been suggested that the mRNA vaccines may cause a significant increase in IL‐6 production and recruitment of Th17 cells, 6 which not only participate in the pathogenesis of psoriasis, but also in many other autoimmune diseases.

In conclusion, we report another case of vitiligo after COVID‐19 vaccine in a patient with unremarkable medical history. Although mechanism remains unclear, given the suggestive time sequence following vaccination and the increasing number of cases reported, we believe these hypothesis deserve further investigation